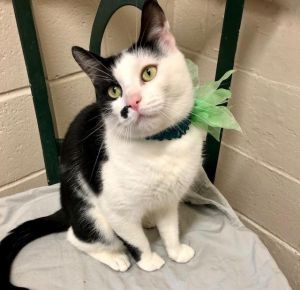 Meet JOANNA. She is a 1 ½ year old SWEETHEART whose story will make you shake your head in disbelief. Joanna was found tied up in a trash bag at the bottom of a dumpster! Her meows were heard by a passerby and the police were summoned. Thank- goodness the officer brought her to our shelter. That day, we made Joanna a promise that we would NEVER let anyone harm her again! The volunteers at the shelter LOVE Joanna. She is a tad shy, but totally understandable considering the ordeal she has been through. She’s very TALKATIVE and loves to have BELLY RUBS. She’ll be fine with other cats after a slow and proper introduction. Joanna is in residence in Long Beach, NY. She is spayed, UTD on shots, and FIV/FeLV negative. WATCH HER VIDEO!!!!!